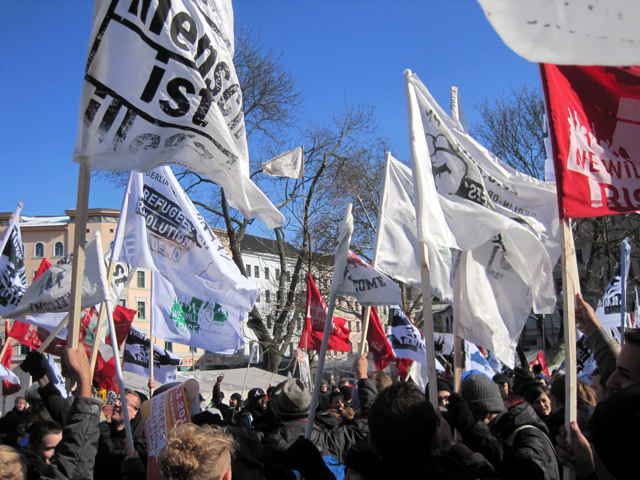 Welcome and introduction to the conference

«  Thomas Gebauer, Frankfurt, Medico International: Forced to flee – causes in the countries of origin, accountability of the EU

«  Volker Gerloff, lawyer, Berlin: The residence requirement and other prohibitions, the impact of anti-terrorism legislation on refugees

«  Kati Verstrepen, lawyer, Antwerp: Is it a crime to marry ?

«  Pierluigi Umbriano, lawyer, Naples: Is it a crime to help people to survive (Cap Anamur and other cases)

«  Claire Saas,associate professor of criminal law and procedure, gisti, Paris: The European return directive as implemented in France. The paradox between minimal protection and deportation mania

«  Christophe Tafelmacher, lawyer, Lausanne, Switzerland: The Swiss expulsion-initiative – a danger for the rule of law

16h00 – 17h30: JUSTICE, SOLIDARITY AND RESISTANCE – AKNOWLEDGE AND STRENGTHEN THE RIGHTS OF MIGRANTS

a.       Adrian Berry,Barrister, Chair of the Immigration Law Practitioners’ Association (ILPA) (UK):Jurisdictions at the service of Refugees? Key cases from the ECtJ and the ECtHR

N.N., Initiative for the “Protest against 20 years of Asylum Law Compromise” in Germany

Organizers of the Conference:

Registration is necessary, so as to pay for the organisation of the conference and for the right to entrance.

The registration fee is € 30,– (none for participants without a job) to be paid in cash at the entrance.

On their way to the European Union (EU) migrants experience in many  – often life-threatening – ways that they are not welcome. This is also true for those who finally arrive in the EU. Quite often the EU and its member states bear responsibility for the causes of flight and migration of migrants from their home countries, like persecution and poverty.

The barriers which are erected against refugees and migrants are often put into a legal form which does not conform to human rights and the rule of law. When international refugee law is applied, if this happens at all, this is often done as if it were an act of charity. The Court of Justice of the European Union (ECJ) and the European Court of Human Rights (ECtHR) have in many cases dealt with the practise of denying entrance and granting asylum and of extradition from the EU and its member states.

The German Government in its effort to appear formally correct, already 20 ago trimmed the right to asylum guaranteed in the German Constitution. In remembrance of this human rights scandal various protests will be organized this year. ELDH and VDJ, its German affiliate, together with many organisations and initiatives will join these protests.

At the conference the speakers will analyse the different stages of flight and migration and the legal questions in this context.

1.                   The illegal and inhuman criminalisation of refugees and migrants even before they arrive in the EU. The barring of escape routes, in particular by FRONTEX. Thousands of refugees have lost their lives due to these obstacles.

3.                   The discrimination against refugees and migrants, i.e. by the constraint to work under precarious or unconscionable conditions, ethnic profiling by the police, excessive databases.

4.                   Various methods to expel refugees and migrants, i.e. the very often tolerated or not sufficiently combated racism which humiliates refugees and by its aggressive form threatens their life.

«  The jurisdiction in favour of refugees and migrants,

o    For a fair – not reduced – asylum procedure, which does not consider flight as a crime

o    For human conditions to work and to live for refugees

o    For an effective right to stay, which allows to refugees at least a medium term planning of their life