The message by Selçuk Kocağaçlı 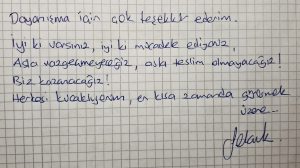 Translation of the message:

A group of 15 lawyers from 7 European countries met in Istanbul from 13 till 15 October 2019 for a fact-finding mission to clarify the legal circumstances that led to the conviction of 18 Turkish lawyers by the 37th High Criminal Court in March of this year, resulting in long prison sentences.

There are currently two mass trials in Turkey against members of the Turkish lawyers’ organization CHD çagdas Hukuçular Dernegi (Progressive Lawyers Association). In the first trial, which opened in 2013, 22 lawyers are accused (CHD I proceedings). In the second, which was opened in autumn 2018, 20 lawyers have been accused (CHD II proceedings). Eight of the lawyers accused in both cases are identical, with the same accusation of being a member of a terrorist group. In the second trial in March 2019,18 defendants were sentenced to between 3 and 18 years and 9 month imprisonment. The chairman of the CHD was sentenced to 11 years and 3 months. All lawyers were convicted for activities connected with their professional functions and were identified with their clients’ causes. Istanbul Regional Court has rejected the appeal without an oral hearing. All of them will appealed to  the Supreme Court.

Most of the European lawyers have already participated as observers in the mass trials of lawyers in Turkey and other politically motivated proceedings. Their main focus was on the question of whether Turkish and European law was violated in the proceedings. The results of these observations were recorded in reports.

The observations of the two CHD trials as well as numerous other politically motivated trials in Turkey, raised serious concerns about the respect for the rights of the accused and the defense lawyers. This was particularly the case with the 37th Heavy Criminal Court in Istanbul. Among other cases, it was in charge of the proceedings against Selahattin Demirtaş (one of the two HDP presidents), Canan Kaftancioglu (the Istanbul CHP president), Ahmet Altan (writer and journalist), şebnem Korur Fincanci (the president of the Human Rights Foundation of Turkey and one of the academies for peace), Ihsan Eliaçik (theologian and author).

During their stay in Istanbul, the European lawyers held talks with the defense lawyers of the 18 Turkish lawyers convicted, with 4 lawyers imprisoned in Silivri, including the chairman of the Turkish lawyers’ organization CHD, Selçuk Kozağaçlı, with defense lawyers from other politically motivated trials before the 37th High Criminal Court (see above), with the President of the Istanbul Bar Association, and with members of the Turkish Parliament.

They examined the question, taking into account the reasons for the judgement,

Video recording of the conference.